The City of Johnston has a rich history with murals throughout our community. Clay murals can be found at the intersection of NW 86th Street and NW 62nd Avenue and at Lawson Elementary School.

HOME OF THE HYBRIDS

Young Henry A. Wallace began his experimenting with hybrid corn at his family's home in Des Moines. Later, Wallace continued his com breeding experiments on a farm, which his wife bought in Johnston along what is now NW 62nd Avenue.
The company, the Hi-Bred Corn company, he founded with a few friends and his brother James in 1926 to support his com research has grown into Pioneer Hi-Bred International, a giant in the seed business, and since 2000, a part of the DuPont Company.

At one time or another, over the years, Pioneer has developed and sold, in addition to the seed com, seed for wheat, sorghum, soybeans, cotton, alfalfa, sunflowers, as well as hybrid chickens and beef cattle.

The many buildings of the research campus of the company, and its research fields occupy a large area in Johnston. Henry Wallace went on to become Secretary of Agriculture, Secretary of Commerce, and Vice President of the United States, under President Franklin Roosevelt.

The design of the clay panel is taken from a Pioneer advertisement from the 1930s. 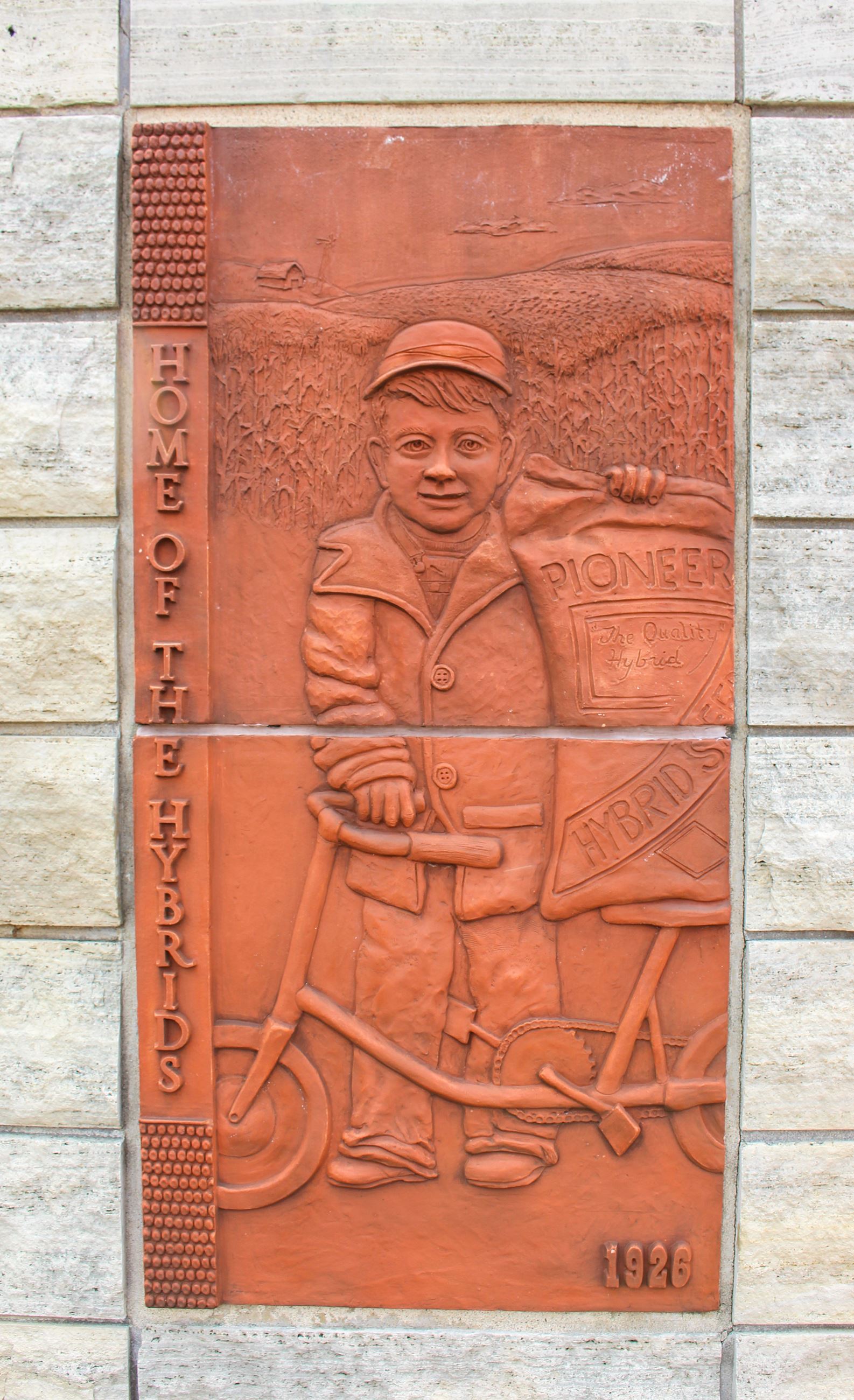 The Interurban ran through Johnston Station. It ran from Carlisle through Des Moines and up to Perry, Iowa. The electric train provided commuter service as well as carried freight. Johnston was named for the station master, John Johnston. The tracks were laid and service started in 1907. The tracks were tom out in 1974. Johnston's main storm drainage system is laid in the railroad right of way. 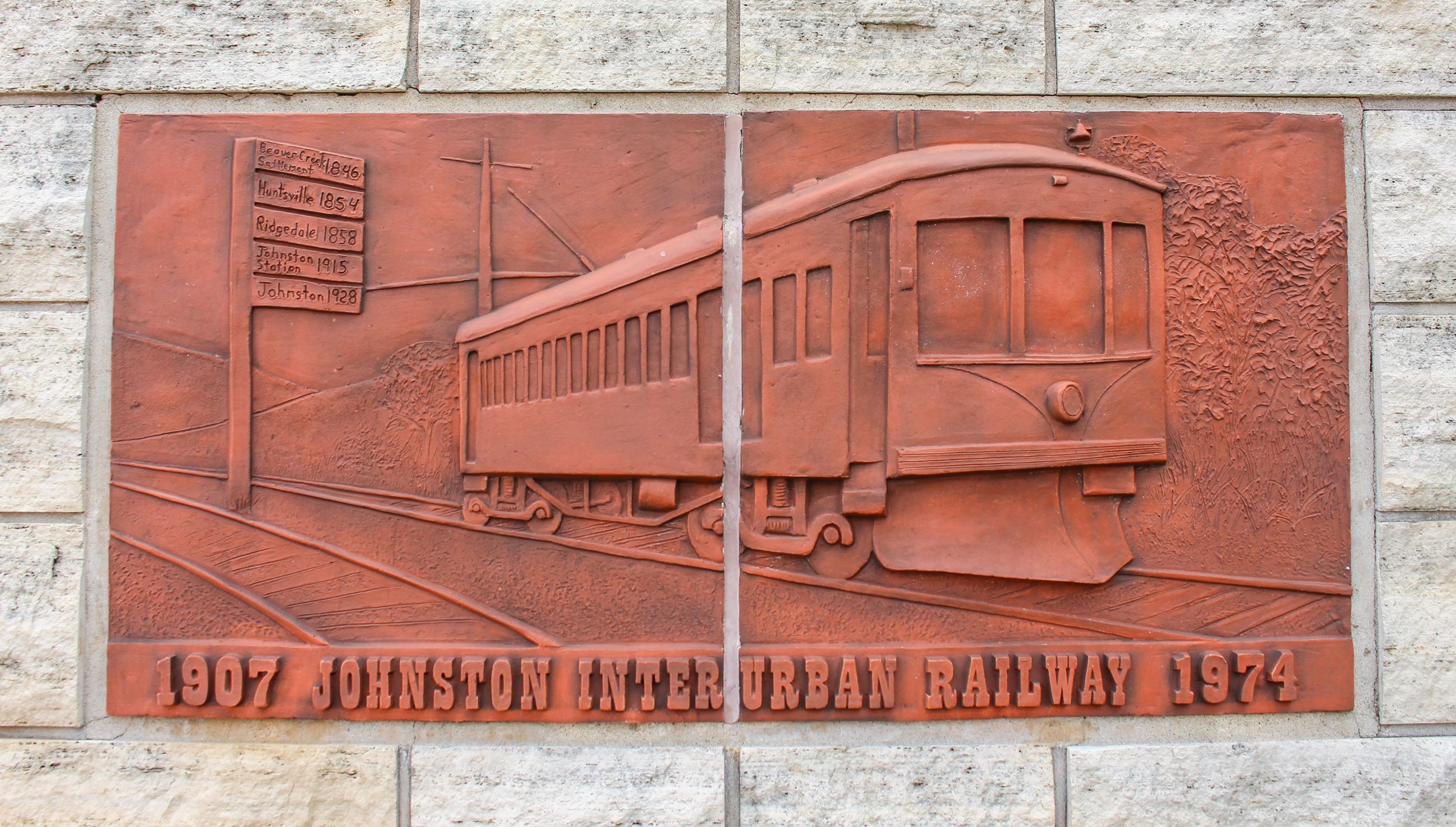 M. W. Robinson came to Iowa in 1838 and located in Burlington. In the spring of 1869, he and his wife, Martha, and three children came to Polk County and bought a farm of 1,120 acres, well improved, fenced with boards and rails. The family farmed the land and raised stock, mostly sheep. The tile shows the ranch, with what is now Merle Hay Road on the right with a horse and buggy. In the distance is a horizontal row of trees, depicting what is now 62nd Avenue. The scene shown is from a vantage point of about NW 55th Avenue and Merle Hay Road. 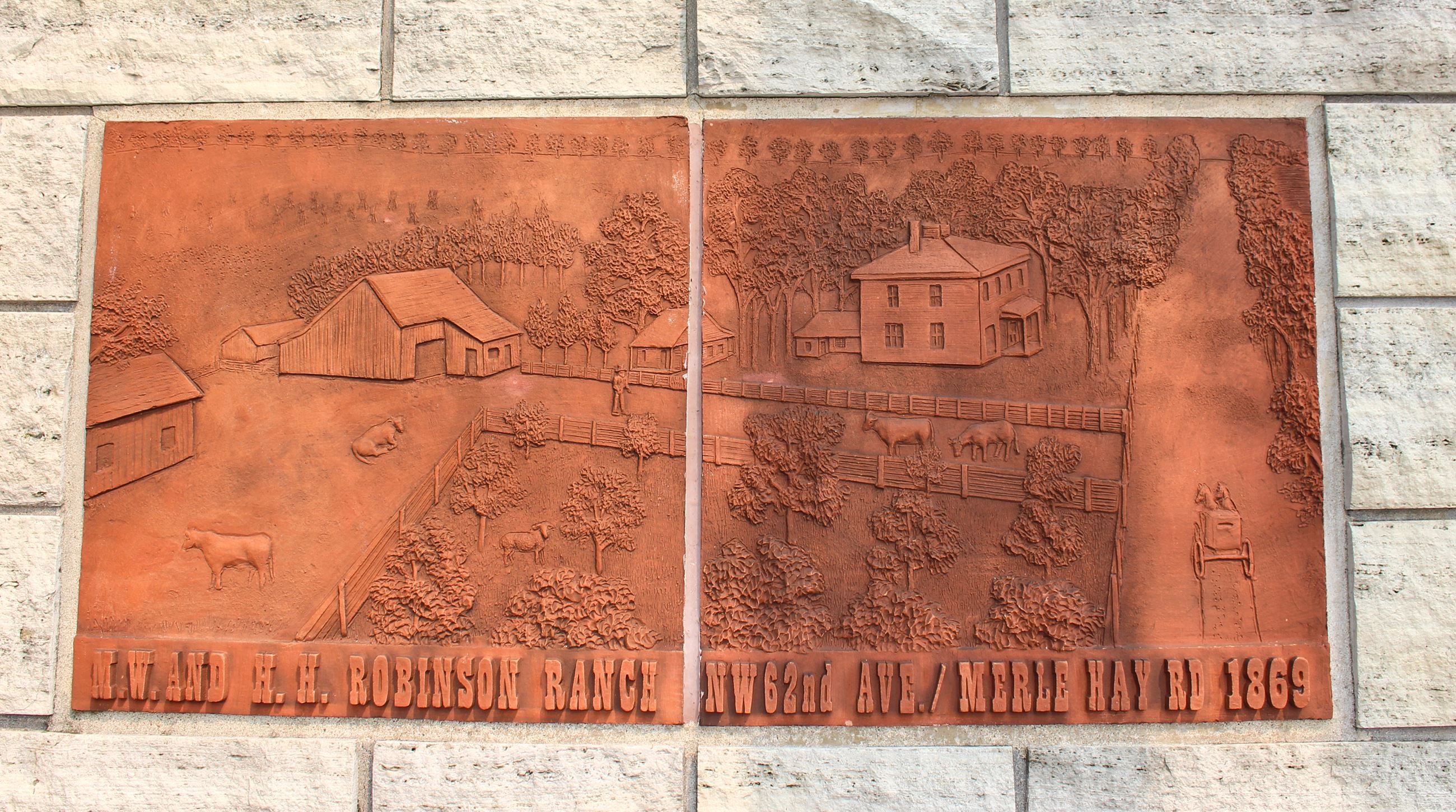 Ephraim and Laura (Bauman) Garlock moved into a home in 1928 on Beaver Drive (known as the Ridge) where they had a large apple orchard. The orchard was damaged by an early freeze in 1941. They again planted a large apple orchard on the 86th Street Bauman home place ( also later known as the Simpson place) (south of 70th Avenue) that Laura had inherited from her parents John and Mary (Friar) Bauman at their passing. They had many varieties of apples. Mary's parents started the Friar School that was closed along with three other schools to start the Johnston School system. Laura and Ephriam had four sons: William, Henry, Donald and Robert. 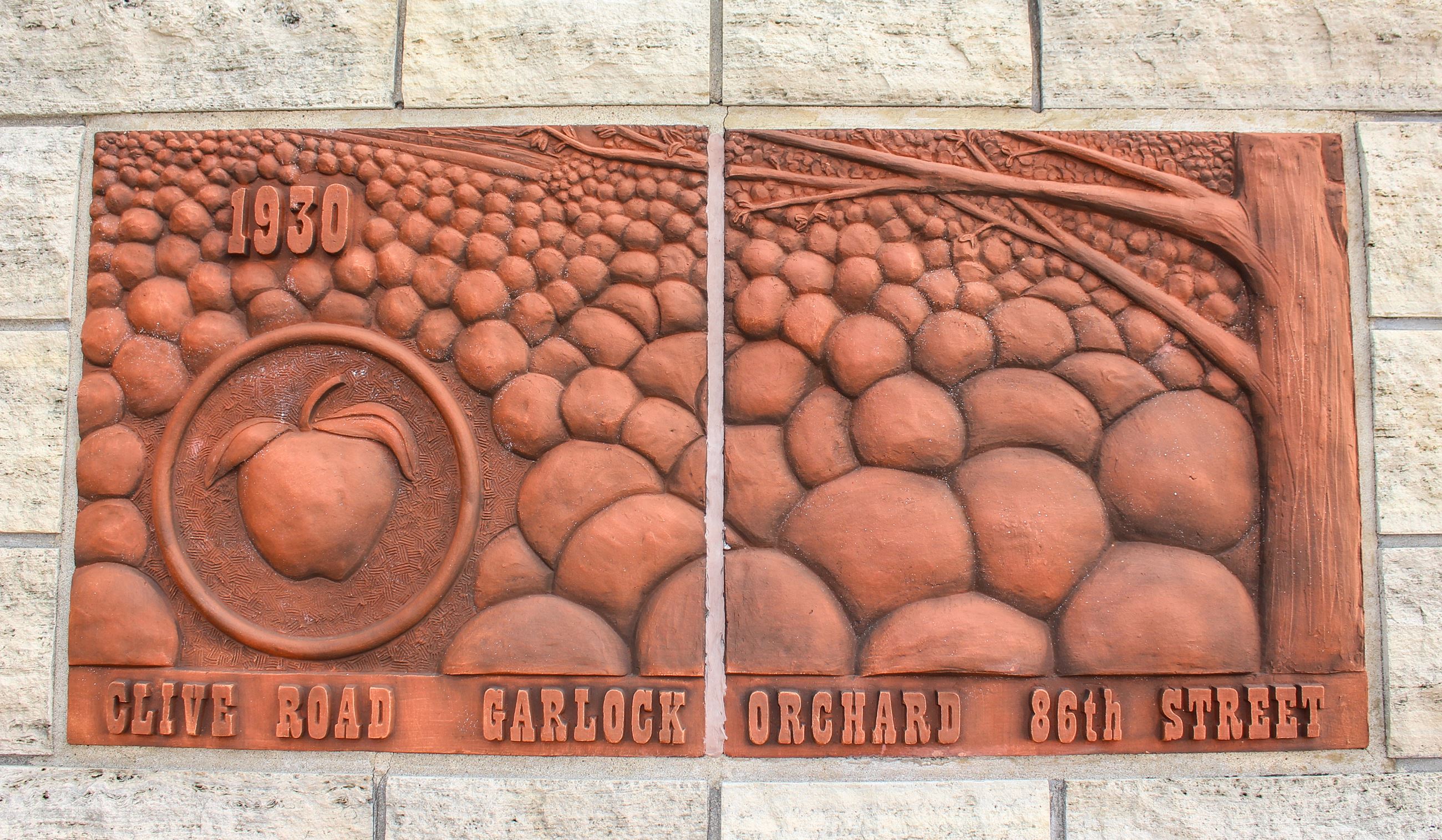 The Johnston School System was originally started by closing four one­ room schools: they were Valley, Friar, Ridgedale and Rider schools. In 1914, the second consolidated school district in Polk County was formed including these four districts and was called The Independent Consolidated School District of Webster and Jefferson Townships of Polk County, Iowa. In 1915, the construction of a new school building (K-9) was awarded. In 1917 the Seibert Grade School was added and the name changed to The Consolidated Independent District of Johnston, Iowa. In 1918, it was expanded to a (K-12) school. The first high school graduation was held in 1920 with six members graduating. In 1962 the school name was changed to The Johnston Community School. The new high school building was constructed in 1974 west of the original high school. The last year the school was used was 1984. The new middle school was constructed in 1981. In 1958, the John Lawson Elementary School was built and in 1988, Henry Wallace Elementary School was constructed. The Beaver Creek and Horizon Elementary Schools have since been built. 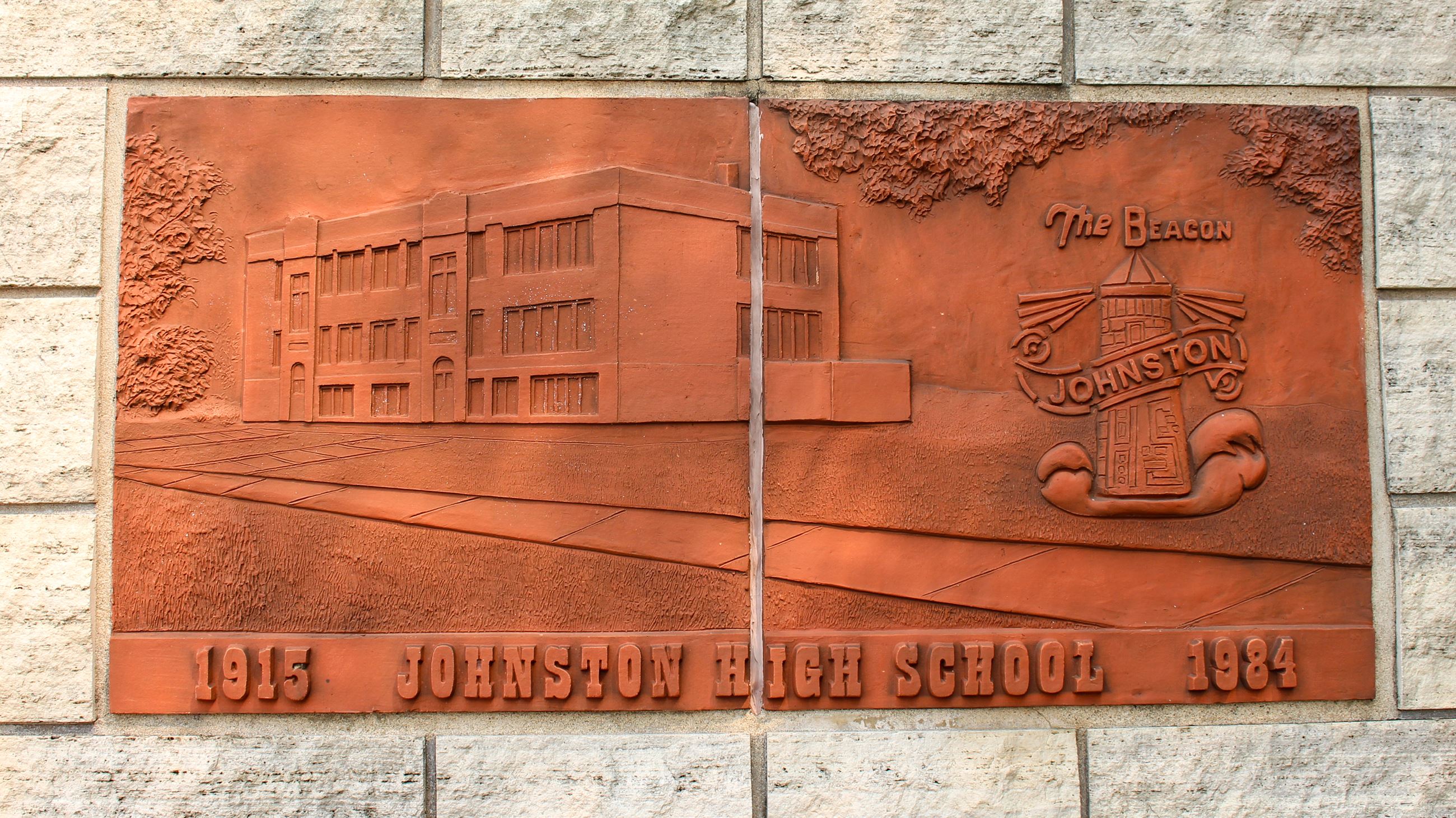 The area of Johnston known as Camp Dodge is named after General Grenville Dodge, of Civil War fame. The training site, approximately 4500 acres, is a collection of farms and has been training military personnel from Iowa and across the nation from 1908 to the present day. The area was annexed into Johnston in 1970. Camp Dodge is now the headquarters of the Iowa National Guard and the National Maintenance Training Center for the Army.

The tile depicts a World War I doughboy. During the summer of 1917, the local contractors prepared the site for WWI boot camp, building 3000 buildings of which 300 were barracks. The Main Gate rock pillar shown on the tile and the fence along N. W. Beaver Drive were constructed in thel930's as a W. P.A. project.

To learn more about Camp Dodge, past & present, visit the Camp Dodge Gold Star Museum and read more about it.

Mrs. Scott started teaching English at Johnston in 1928. She soon became principal at the school and served for 30 years, retiring in 1958. She earned a bachelor's degree from Simpson College and did graduate work at Drake College. She passed away in 1975 at the age of 83. 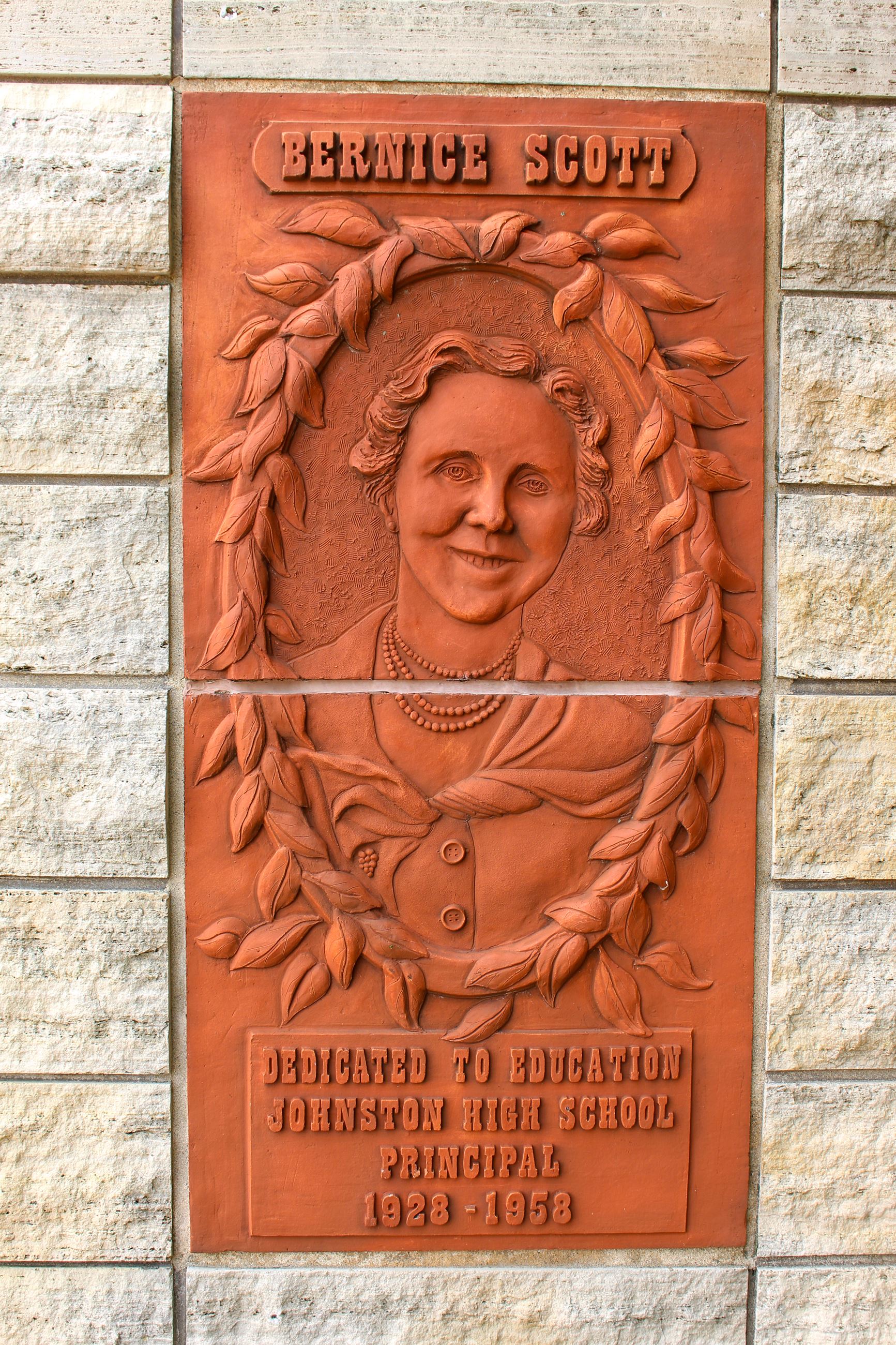 The Sac and Fox Indians (also known as the Sauk and Meskwaki) came to Iowa from Wisconsin in the early 1800' s. They displaced the Ioways, who left for Kansas. The Sac and Fox made their home along the Des Moines River basin. The men of the tribes hunted for game and the women tended patches of com that they planted. Following a treaty with the U. S. Government, the tribes ceded their land for a sum of $800,000. Chief Keokuk led his people out of Iowa in May, 1845, opening the way for settlers to move into the area. 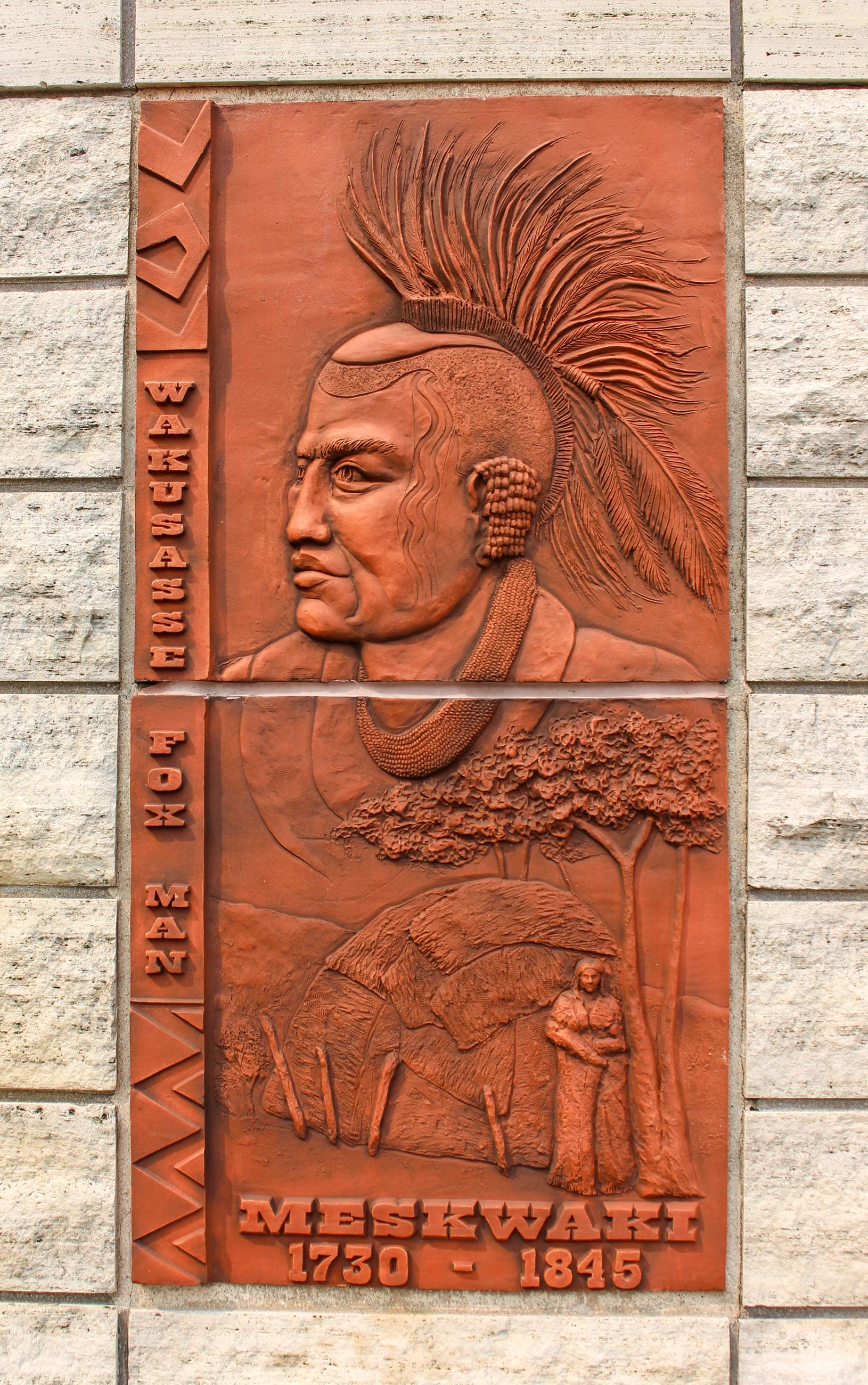