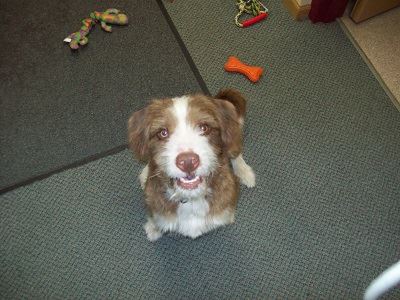 When an animal is found in Johnston, the Johnston Police Department picks up the animal and transports it to the City's temporary animal shelter, located in our Public Works Facility at 6400 NW Beaver Drive. The Public Works Department is then notified that there is an animal in the shelter. A picture is taken and the animal’s information is logged into our system. The animal is scanned for a microchip when impounded. The animal’s picture and information is then posted on the Iowa Pet Alert website. To search for your lost pet visit the Iowa Pet Alert website.

The Public Works facility has the capacity to hold three dogs and four cats at one time. We have indoor/outdoor runs for the dogs with an expanded, secure green space for the animals to play. The facility is air conditioned and heated. Animals have around-the-clock care while in the City’s shelter. This is considered a holding facility as the City holds stray animals for a period of three days while searching for the owner of the animal. Our shelter is licensed with the Department of Agriculture.

After the three-day hold time, the animal is transferred to the Animal Rescue League and held for an additional seven days. This gives the owner ample time to search and locate the lost animal. After the total hold time of ten days between the City and the ARL, the animal is tested for temperament and placed up for adoption through the ARL if it has not been claimed by its owner.

Since the Public Works Department does not have an animal control officer on staff, we do not hold aggressive or feral animals at the City shelter. Sick or injured animals are also transferred directly to the ARL so they can receive the medical attention they need. In extreme or emergency situations the City relies on a local vet to help care for those animals.

Since the City does not have an animal control department, the impounding and care for animals in our shelter is a joint effort between Public Works staff and the Johnston Police Department.

Residents can call the Public Works facility during operating hours to arrange pick up of their impounded animal. After hours and on weekends, residents will need to contact the Police Department to have the animal released. The fee for an animal impound is $50 per incident. If the animal is impounded and is not licensed with the city, there will be an additional charge of $10 to license the animal. The fee is due when the animal is released to its owner. Once transferred to ARL, the owner is responsible for paying the City of Johnston fee as well as the fees that are charged by the ARL for the animal to be released.